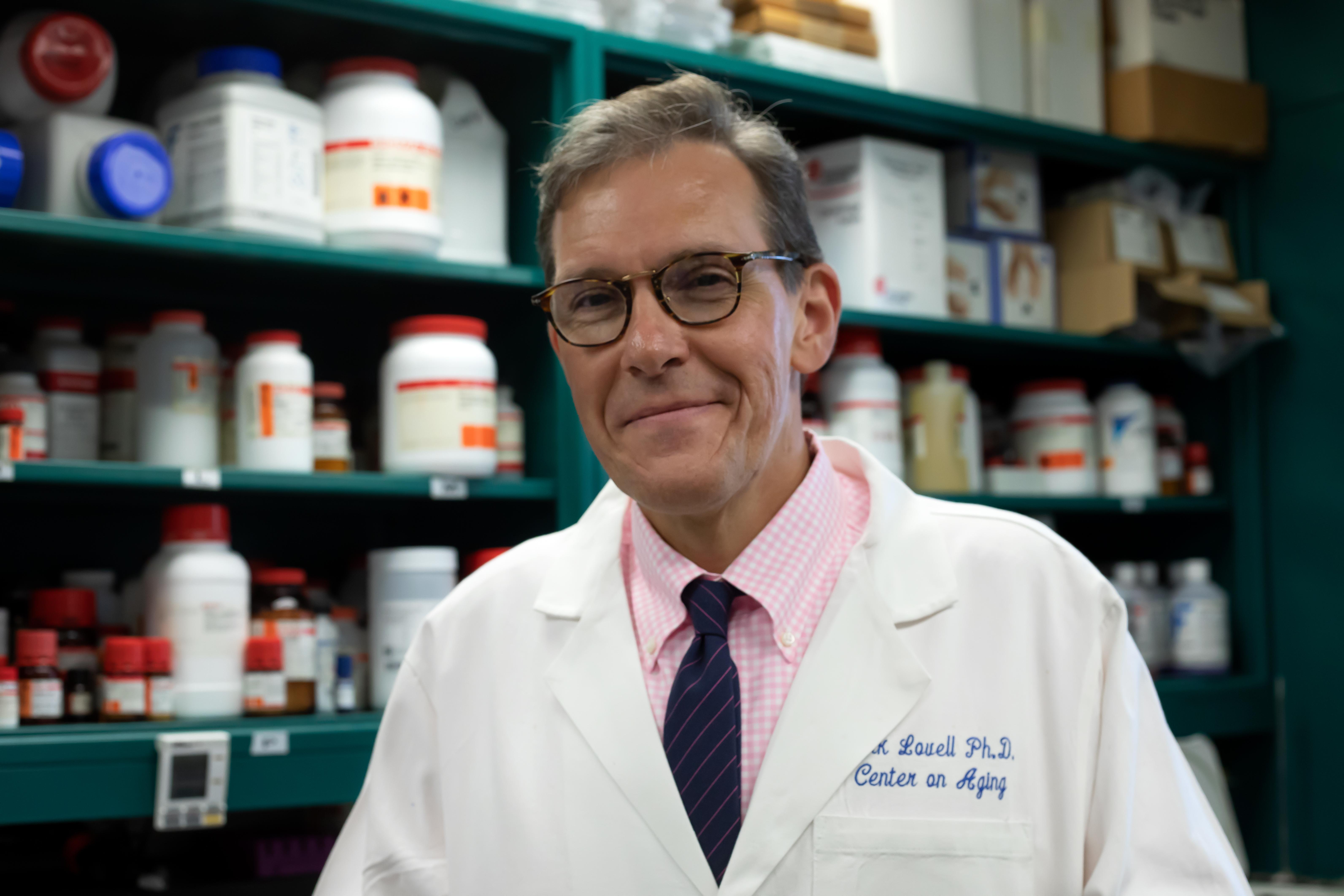 In higher education, the value of following your passion, meeting challenges head-on, and working towards something bigger than yourself are all promoted to students by their professors. Sometimes, students are lucky enough to have a teacher who not only encourages this, but lives it too.

UK’s Dr. Mark Lovell, Chemistry, is one of those teachers. Growing up in Mount Vernon, KY, Lovell stayed close to home and attended Berea College for his undergrad.

Post-grad, Lovell tried his hand at medical school, but found himself ultimately drawn to graduate school at UK. He received his doctorate here working with Dr. William Ehmann, radiochemistry professor, and Dr. William Markesbery, Director of UK Sanders-Brown Center on Aging. It was through these two influential men that Lovell first found his path.

Lovell found himself completing a post-doc at the Center on Aging and eventually moving to a research faculty line at UK and ultimately a tenure track line, all while also working at the Center.

“Being at UK and Sanders-Brown gives a varied perspective since we have such a wide range of faculty there,” said Lovell. “It makes it really nice. If, as a poor, old chemist, you run into a problem outside of chemistry, there are other folks in the building who are very collaborative and willing to jump in and help.”

UK became a beneficial choice for Lovell. Not only did he meet mentors that corresponded with his personality and cultivated his passions, but Lovell is also able to remain close to his elderly mother and watch out for her.

“I really just developed a love for the campus and the Center and the work we do, so that’s really why I came to stay at UK,” said Lovell.

This love for his work is something that has never left Lovell. To this day, he is still tirelessly working on projects related to Alzheimer’s, head trauma and stroke, including one of his most exciting projects to date. The study examines a circulating marker of head trauma. Lovell and his team have identified a circulating protein that can be picked up in a finger stick and indicates a minor head injury.

“The difficulty with assessing head trauma is that minor injuries typically fail to show up on imaging,” said Lovell. “Unfortunately, if an injury is big enough to show, it’s probably no longer a mild injury.”

Lovell’s team has developed a finger stick that uses less than a drop of blood to identify a minor head injury. The device works much like a home pregnancy test, with a pink line appearing after 20 minutes if positive.

Currently, they have worked with the UK emergency department and have moved to conducting the study with UK and EKU athletics.

“We’re actually working with them to determine if we can identify concussive head trauma in football, soccer and volleyball under an NIH award,” said Lovell. “In addition, we just submitted a proposal to the Department of Defense to expand the project to 11 other Universities.

This expansion could potentially increase enrollment to include approximately 1400 athletes, and potentially 150 -200 concussive injuries.  Among many observations, Lovell and his team have determined that the biomarker is not elevated by basic activity, but that there is a small but significant increase in baseline levels in athletes with repeated contact over the athletic season. This potentially suggests that accumulating minor injuries over time may contribute to neuronal injury.

Even though the project has presently branched to athletics, military and emergency department purposes, its origins are much more personal for Lovell.

“Back in 2012, my favorite aunt had a transient ischemic attack and went in to the ER, where she was told nothing showed up in imaging,” said Lovell. “After bouncing around trying to decide if there had actually been an ischemic event the physicians decided that they would start her on aggressive clot busters”.

“I thought, if there had been a simple device that could have picked up on a marker indicating an ischemic event in the ER, then it might have helped in the decision of whether or not to start these therapies at a more therapeutically beneficial time,” said Lovell. “So that’s when I started working on the device and as the research progressed it became apparent that the approach was better suited for head trauma detection.”

In the future, Lovell hopes to modify the device to add additional lines to identify more severe injuries and possibly use the device for children in the emergency room.

“Based on current guidelines from the American Association of Pediatrics to minimize CT-imaging of children, there is a need for a non-invasive approach to identify children with head injuries who need imaging,” Lovell said. “A classic example is a child who falls off the swing set and hits their head.  Because our device only requires a finger stick, it could potentially provide a non-invasive way to determine if an injury is minor or significant enough to merit imaging.”

Another exciting project for Lovell is the development of a small molecule that is protective in animal models of Alzheimer’s pathology.

“Working with Dr. Bert Lynn in the Chemistry department, we’ve developed a small molecule that appears to interrupt a pathway inside astrocytes that could potentially slow the cascade of events leading to neurodegeneration,” Lovell said.

“Our ultimate goal is to move toward clinical trials in humans. The compound is poorly water soluble and we’re currently working to modify the chemistry to increase solubility but keep the drug activity. I’m realistically hopeful!” 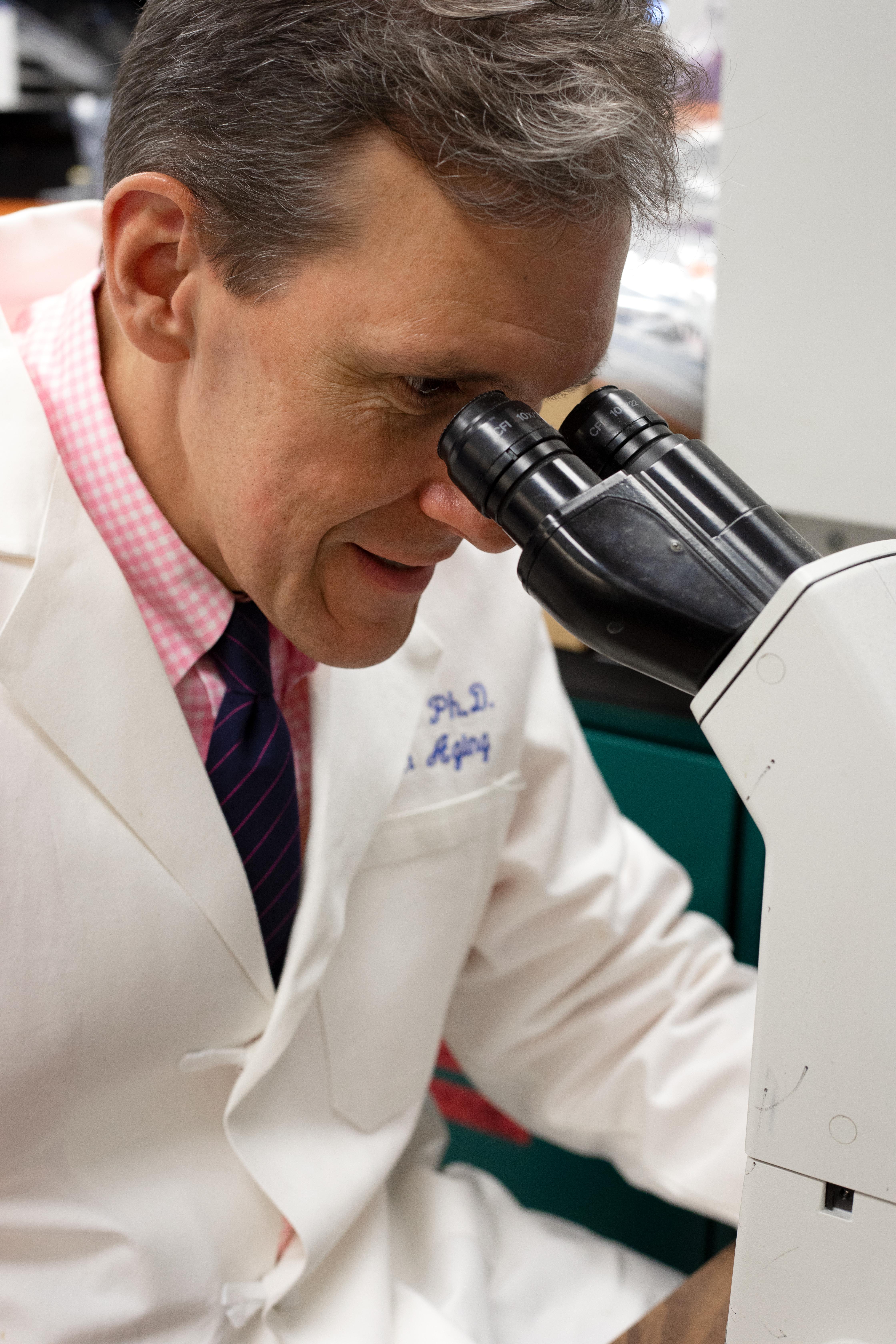 Lovell, not one to back away from a challenge, intends to continue his ‘fascinatingly frustrating’ work with Alzheimer’s and head trauma.

Despite his personal success, Lovell credits many people who have helped him along the way.

“Dr. Markesbery was a big influence for me in a variety of ways, even from little physical gestures I’ve picked up from him. Over the years I’ve noticed that aspects of my lecture style in class were really influenced by both Dr. Ehmann and also by Dr. Steven Yates (Chemistry).”

One of his largest influences has been Dr. Mark Meier, the Chair of Chemistry, whose position Lovell will be taking over this July.

Regardless, Lovell intends to pursue his studies and projects in the near future and will never diminish the importance of his work.

“Currently the biggest segment of the US population includes folks who are moving into the age of onset of Alzheimer’s disease. So this is going to be a substantial health issue for this country unless something can be developed,” Lovell said. “My biggest hope is that something we work on may some day be beneficial to patients.”